No person is a number however, during our formative years we make decisions about ourselves to help us fit in to our unique environment. From these decisions a position is taken called the thrust number.

With all personalities the attributes of the wings, (the position either side of the thrust number), when added in varying degrees to the thrust number, creates personal individuality. It is of the utmost importance that each of us understand the cocktail mixture we have created with our thrust number and wings. 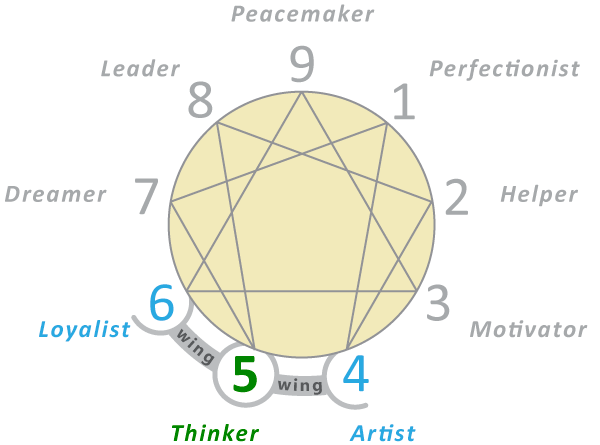 The five personality has an enquiring mind and they are master gatherers of information who, when in balance, freely share their knowledge, theories and concepts.

On integration to the point eight, (integration explained fully in CD/Audio workshop) the five personality becomes quietly assertive and involved. They are protective of loved ones and anyone they consider to be disadvantaged.

When balanced the five personalitiy is active and lively.

With the wing of the six the five personality is loyal, energised, a team player willing to take risks and act on them publicly and with the four wing is sensitive, kind and has empathy for others.

Five personalities are often seen as emotionless and cold, however, the opposite is true when they are balanced.

Fives at their best make great partners because they allow others their own personal space and freedom. They make no demands on their time, on where they go, what they do, or who they see as they would see this as an intrusion on others privacy. They themselves need and enjoy their own space and independence and therefore, appreciate these traits in those close to them, disliking emotional demands or clingyness.

Fives do not respond to people or partners who are overdramatic, overemotional or intense. They will withdraw further into their own world of thoughts or conversely, become sarcastic, angry and argumentative. They will respond far more readily when communicated with in a calm and straight forward manner. Five personalities need to take responsibility for the fact that their noninvolvement is often the cause of others overeaction.

Because fives are not spontaneous and impulsive they need time to think things through. Being pushy, aggressive and demanding instant responses, or answers, will see them becoming more distant and stubborn, refusing to give their partner what they want. It is far better for others to briefly state what they want and then leave it with them. When fives have had the time to think and weigh up the situation, others will be more likely to get what they want.

Because five personalities don’t communicate their hurts and fears when they occur, they retreat into silence and become resentful. When they become trapped in these periods of isolation and separation, which can continue for lengthy periods of time, those close to them feel unloved, rejected and excluded. They have no idea what the problem is and they feel they are in some way responsible.

When fives take the risk to communicate their original hurt or fear they drop their resentment and become loving compassionate and involved once again.

When fives are placed in positions, or involved in projects within the working environment, they must have avenues to source all the technical and detailed data. Five’s thirst for knowledge sees them researching all the positives and negatives with a very logical approach. Negatives don’t deter them as their emotions are always distanced. Similarly, positives won’t have them jumping out of their seats as everything is approached intellectually.

When fives have absorbed all the knowledge available they will interact with others. This interaction comes about when others need the five’s assistance. They will only divulge the information necessary at the time, keeping additional information in reserve.

To motivate them, others need to gain their respect, as they can be very cynical and uncooperative in their attitude to any form of authority. Fearing embarrassment they avoid large groups and it would be highly unusual for them to attend seminars or large meetings where all in attendance may need to interact.

Supply the five with all the detailed and technical data to complete a task with set time limits and solitude and they will be motivated to perform. Here we see them drop their reserved persona and volunteer information. They will become interactive and humorous without the feeling of being the misfit.

The five personality can be one of the best problem solvers of the study as resolution is acquired through their thinking process and their ability to draw on the massive amounts of accurate information stored away in their memory.

Although fives may portray a distant and detached persona, they really do love being involved. This involvement should come as an invitation as they can often feel unsure about inviting themselves due to their entrenched habit to observe. The fear of taking emotional risks can see them shutting down and isolating themselves from colleagues and members of the team. At these times they respond to reassurance to become reinvolved.

They don’t look for awards or applause for their efforts, however, they like recognition of their superior knowledge and to be well rewarded financially.

Common complaints about the Five:

Complaints of the Five:

Venture out and take emotional risks. Express thoughts to others in an amicable and pleasant manner without fearing embarrassment. The five needs to complete their innovative and inventive projects prior to commencing new ones in order to gain the rewards for what they have to offer. Be open with their sense of humour to enable emotional contact with others.

Discover your personality type with the enneagram questionnaire.